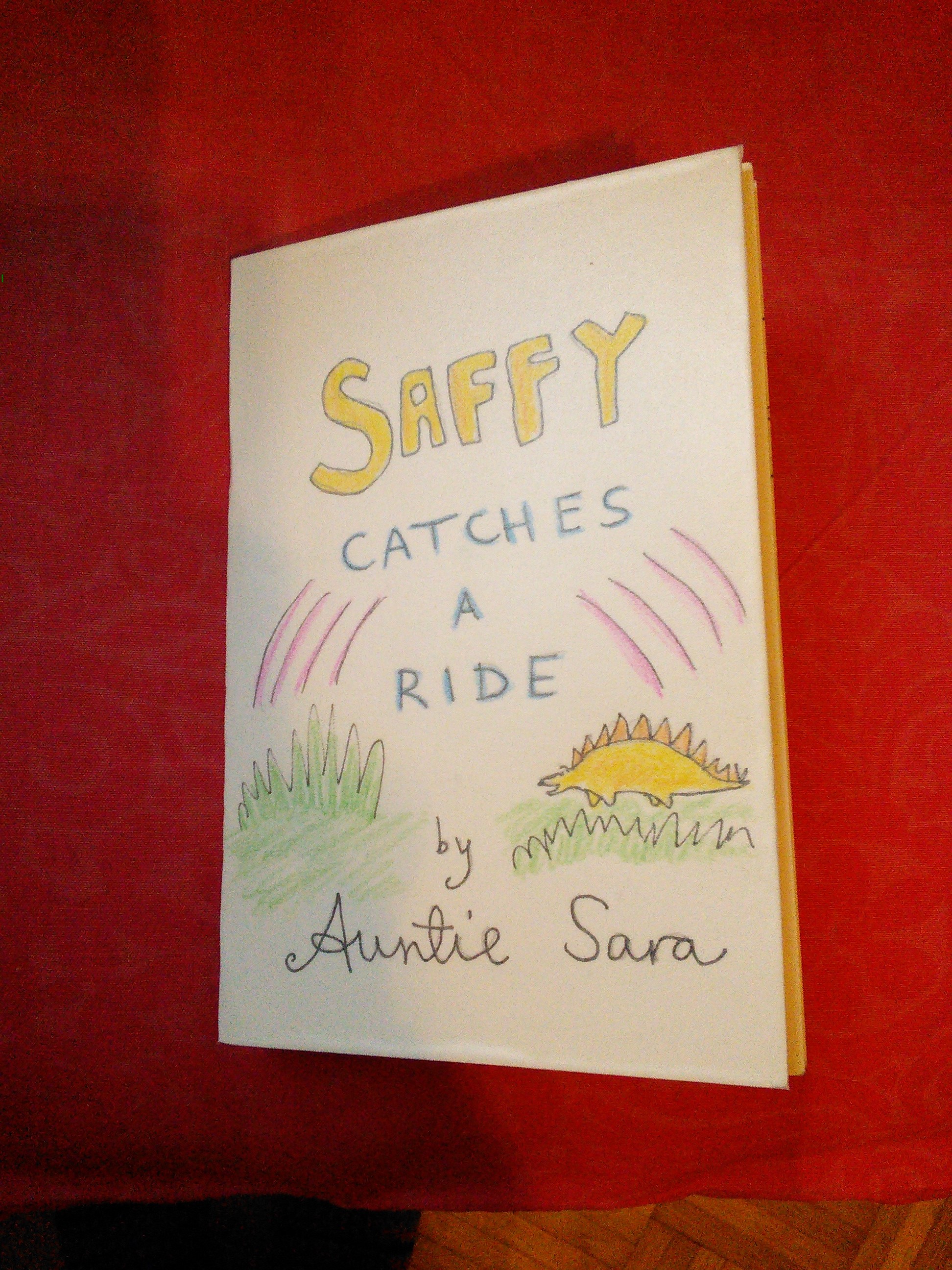 I had my first experience in writing a story for a small child this January. A dear friend’s child had his third birthday, and I decided to make him a picture book as a present, as evidenced by the pic on the left.

Little did I know what I was in for!

I mean, I hadn’t imagined that writing for children would be easy. Far from it. But I hadn’t really needed to think about it before. I’ve always wanted to write children’s stuff too, but more in a writing exercise sense than out of a want to become profiled as a children’s writer or anything. I think most of the stories I want to tell will be for a more grown-up audience (although of course, no need to exclude kids from the audience as such – when I was small, I read a lot of stuff that was “too difficult” and so on).

Anyway, I had the idea in mind for quite a while. Since the kid currently adores dinosaurs and spaceships, I thought I’d write a story that gave him both. Because why not? However, as always, the idea was the easy bit. It took me ages to actually get writing, because I was so unsure of how to write for a 3-year-old.

When I finally got to it, I was surprised at how easily it came out. I’d thought out a simple enough story, with repetition and a happy ending. It was difficult to keep my language simple enough, though. Here are some things I had to pay extra attention to:

The hardest part was that although I’ve read picture books to this kid and seen what he’s got in his library, I wasn’t really sure of what level of difficulty a 3-year-old is on. Oh well, if it’s too difficult, he’ll grow into it, at least! Saffy Catches a Ride is basically about a little Stegosaurus (the eponymous Saffy) who gets lost and asks some other dinosaurs for help. None of them know where her parents are, but then she meets a Martian and is taken home in a spaceship. Fairly simple, as I said. 🙂

The total word count was around 600, which ended up being 13 pages of pictures + text in the final product.

In the end the writing was far from the most time-consuming part of the book. When I’d written the text into the little pages I’d cut out, I realised with horror that I don’t actually know how to draw dinosaurs. Or spaceships.

Oops. I mean, I used to draw a lot, so it’s not like I’m terrible at art as such. However, I usually draw people, so dinosaurs and space tech was a bit of a challenge. I spent ages making simplified designs that wouldn’t be too hard to replicate for 13 pages; then pencilled the pictures in, inked them, and coloured them in with coloured pencils (keep it simple – watercolour would’ve been great, but nope, didn’t want to risk ruining the whole thing with an accidental splash).

All in all, it was about an hour of work on the text vs. five or so hours on the pictures and putting the book together. It was a fun art project despite my initial frustration!

And the expression on the kid’s face when I gave him his present and told him it involves dinosaurs and spaceships – that gleeful grin and excited cheek-clutching was the best payment this auntie could ask for!