Sunvault: Stories of Solarpunk and Eco-Speculation has its release day today, 29 August! (It’s still just about the 29th in Finland as I type this at a few minutes to midnight.)

Get your copy in ebook or paperback! (Other retailers also have it!)

I got my contributor’s copy already two weeks ago, but alas, have not had the time to start reading it yet. SOOOON. The table of contents looks so enticing – a lot of amazing writers in this anthology.

I got my contributor's copy of Sunvault from the post office today! It's so beautiful aaaahhh! The cover art by Likhain is so glorious. And it is always special seeing one's own work in print in an actual physical book. (The antho will be available for purchase soon!) ☆ #contributorscopy #sunvault #sunvaultantho #solarpunk #squeee #nofilter

My poem, “Sunharvest Triptych”, was written at the end of May in 2016 – written specifically for the exciting call for solarpunk sent out by the Sunvault editors Phoebe Wagner and Brontë Christopher Wieland. I’m still so amazed that this poem got included in the anthology, especially since I almost didn’t submit it in the first place!

The process for this poem was more structure-oriented than most of my poetry. The three-part structure was there from the first sketch, and a basic idea for what the sections should contain, and some worldbuilding notes such as “solar energy harvested in summer primarily, stored and used through winter (cf. potato stores and grains in the olden days)”. But the sketch was very much a sketch, not a full poem yet. Just ideas coalescing into words. Usually the first drafts of my poems come out with words and ideas in one intense burst, but this time there was more of a cerebral process.

I wrote the first proper draft a couple of days later; it already looked pretty similar to the published version. I took it to my writing group in early June, feeling very insecure about the whole poem because my brain was telling me it was boring and badly written. But my fellow writers’ encouraging and useful feedback convinced me I should revise and submit the poem – and so I did. I’m very grateful to Helsinki Writers’ Group: I would probably have self-rejected this poem if not for the feedback I got. Thanks, peeps. <3 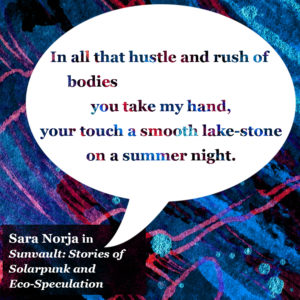